I’ve always loved Desert Island Discs and wasn’t suprised to learn earlier this month that the long-running series was named the greatest radio show of all time by a panel of industry experts compiled by magazine Radio Times.

The show beat British radio classics such as The Archers, Round the Horne and Hancock’s Half Hour to top spot, with over 40 radio experts picking their favourites from broadcasting history.

Speaking to Radio Times,  Desert Island Discs producer Cathy Drysdale attributed the show’s 78-year success to it’s “genius format” that “gets to the heart of people — what moves them and motivates them, what inspires them and enthuses them, who and what they care about.”

Fifteen years ago I was involved in an RSL in West London. An RSL is a restricted service licence radio station. RSLs usually run for weeks or months at a time. This one operated for a month out of the Riverside Studios on the south side of the Thames at Hammersmith. My friend Jonathan Slack and I hosted a Friday evening show called The Friday Night Guest List  (FNGL) or “Feh-Nuggle” as we pronounced it.

I adored Desert Island Discs and created my own homage for FNGL. The feature was called Eel Pie Island Discs, after the small island along the Thames at Twickenham. The format was basically a shortened version of Roy Plomley’s creation. Eel Pie ran for 15 minutes and guests chose three rather than eight tracks to take with them.

I interviewed guests with West London and BBC Radio links. Annabelle Dowler (aka Kirsty from The Archers) lived round the corner from me in Shepherd’s Bush and taught me Spanish for a while. I also interviewed West London dweller, Jeremy Vine. Jonathan Slack secured the interview…in BBC’s Broadcasting House! Jeremy recorded the interview on the Beeb’s equipment. Ha! He also introduced me to Steve Wright who was coming out of  a toilet at the time. He wiped his hand on his trousers then shook my hand.  I kinda wish he hadn’t done that.

Eel Pie Island lasted for a month but Desert Island Discs is going strong. I’m enjoying new presenter Lauren Laverne’s input. I wonder, does she have a say in the choice of guests? I’d like to think she chose recent castaways Ann Cleeves, Wendy Cope and Bob Mortimer. All three of those guests made me cry when they talked about their family life. 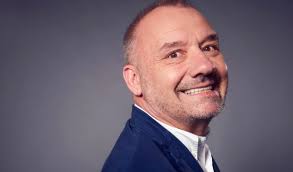 I’ve fantasised over the years about which tracks I’d take to a desert island but you know, it isn’t the music that matters. It’s those memories the tracks evoke.

Here’s to many more years of peerless radio from Cathy Drysdale and team. I hope my bright red radio doesn’t develop salt marks from my tears.