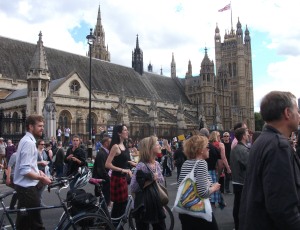 On Saturday I found myself, as I often do, in London. Work takes me there several times a year and I’m always pleased to reconnect with the city I called home for 15 years. In fact, I prefer the place now I no longer live there.

When a business trip to London looms I spend time on my itinerary, trying to squeeze in catch ups with friends plus a trip to an exhibition or gig. I like to have a plan of action for my short visits.

This weekend’s plan was thrown out of the window by Jeremy Corbyn’s Labour leadership landslide. I wanted to experience history as it happened. Instead of an afternoon stroll by the Thames, I scampered off my train at Kings Cross and went to Parliament Square. I mingled with those who had marched in solidarity with refugees at lunchtime and were now resting and socialising. And  waiting to hear Jeremy speak.

Not everyone was waiting to hear JC speak but those that were clapped, cheered and shouted “Jez we can!” when he took to the stage.

As he did something happened to me that hasn’t happened for decades. I was lifted up by my Superman Significant Other who asked “Can you see him yet?!” “No! I can’t!” I wailed and was dropped back to earth with a thud.

Superman didn’t give up. He led me to the raised flower beds beside Gandhi’s statue. I scrambled up and from there just about saw a Corbyn-shaped speck on the stage. I still couldn’t hear him. I don’t think many could but that didn’t stop the whoops and cheers. 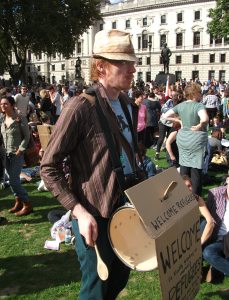 I looked around from my vantage point at Winston Chruchill’s statue facing away from me and to David Lloyd George’s looking straight at me and at the crowd. 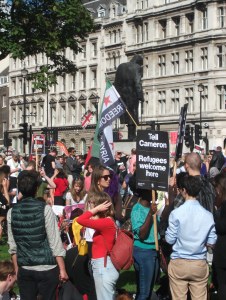 To all those who think Corbyn’s dragging supporters back to the 1980s, think again. Corbyn’s young supporters are pulling him forward into the 21st century.  Saturday was not a left-leaning march of yore. For starters there were too many picnics and far too few cigarettes. The past is gone. The future is online and on the streets too. But there was no violence, just drum and bass music, whoops of delight when friends turned up and smiles on the faces of people of all ages. Is this Newer Labour?