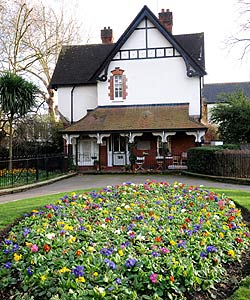 From 2003 to 2009 I managed a team of Recycling Officers for the Royal Borough of Kensington and Chelsea. Our role was to promote recycling to the residents of this densely populated, ethnically and socio-economically diverse area.

I spent most of my time in the role working in the shadow of Grenfell Tower.  My now-demolished office was round the corner from the tower which still stands in the middle of North Kensington. It has become a memorial, a reminder of the terrible events just over four years ago on 14th June 2017.

I loved working in that part of Kensington and Chelsea. I walked the less than two miles distance to and from my home in Shepherd’s Bush.  I enjoyed walking to my office as folk went to work and dropped kids off at school. I relished listening to different languages and clocking a wonderful array of neat gardens and impressive window boxes. Residents were proud of their area. Affluent residents lived close to poorer families but I never felt this created a tension on the streets. People came together in shared spaces like Avondale Park on Walmer Road and Portobello Road market.

In the days after the disaster, I watched TV footage of grieving protesters on their march for justice through streets I knew well. I walked those streets near the tower in my head every morning and evening that summer, mumbling hopeless and inadequate prayers for the victims, the survivors and the community of North Kensington.

Last month I read that relatives of Grenfell Tower fire victims have put forward plans to turn the building into a “vertical forest” covered with 72 species of plants, one for every person who lost their lives in the fire. Whatever happens to it, I wonder if the sweep of gentrification I saw in North Kensington will cease? Four years on, I can’t claim that gentrification was the main cause of the Grenfell Tower fire but it played a part in the man-made tragedy. Gentrification equals profit for certain people but money counts for nothing when you’ve lost everything.

The idea of losing everything was the overriding feeling on another summer day in London. It was a hot day in July 16 years ago tomorrow. Here’s my description of the morning of July 7th 2005:

Come on guys. It’s Thursday morning! Where are you?! The weekend starts tomorrow! Where were my Recycling Officers? I managed a small team and their role was mostly lone working or in pairs in the community. The easiest way to keep in touch was to text or phone. We usually started work between 8am and 9am. It was now just after 9am and I hadn’t heard from about half of my staff.

Kensington and Chelsea is the smallest London borough and I criss-crossed it on foot and bus several times a day. I’d heard from most of my northern staff but what about Recycling Officers off the Kings Road and in Knightsbridge?

It was a hot morning and my skin prickled under a dark blue aertex polo shirt. I stopped for a swig of pineapple juice.  I was standing beside the town hall, the borough’s geographic and administrative epicentre, just off Kensington High Street. I started wandering south past Earl’s Court towards Fulham Road in search of missing team members.

As I walked I started to receive texts probably sent up to an hour earlier. Then Dad rang my personal mobile phone, “Are you okay, hinny?” He’d been watching the TV at home in Blaydon and saw breaking news about bombs on London’s transport system in the rush hour.

I thought about the night before when I sat in my Shepherd’s Bush flat watching the news report of London winning its bid to host the 2012 Olympics.  I opened a bottle of cava and toasted our city and Mayor Ken Livingstone with my flatmates. I had a little cry and raised a glass to the future.

By 11am I’d spoken to all my staff and they were fine. I decided to go to our Earl’s Court office for lunch. I waited at a bus stop beside the Royal Marsden Hospital on Fulham Road. I looked south down the street for a bus. A man walked towards me heading north. He wore a uniform including a short-sleeved shirt. His skin looked grey and I realised afterwards that he was covered in dust. His eyes did not meet mine or anyone else standing in the queue as he walked past.

Later I read that George Psaradakis, driver of the number 30 bus blown up in Tavistock Square, walked home to west London in shock. Was that Mr Psaradakis? I wasn’t sure. There was such confusion in London that day. In fact, when describing that day, Mr Psaradakis said that no matter where he looked, everyone around him was doing the best they could to help amid a scene of utter chaos and confusion.

The next morning fellow tube passengers and I scrutinised an unattended bag and laughed and smiled with each other when it was claimed by a traveller.  Within days I’d stopped looking for possible homemade bombs in rucksacks and got on with living in London. We all had to.

In the 16 years since the 7/7 bombings, I’ve watched TV reports of bombings around the world. Every time I clench my jaw at the chaos and confusion, reflect on the injuries and deaths and imagine a film of dust settling on everything afterwards.